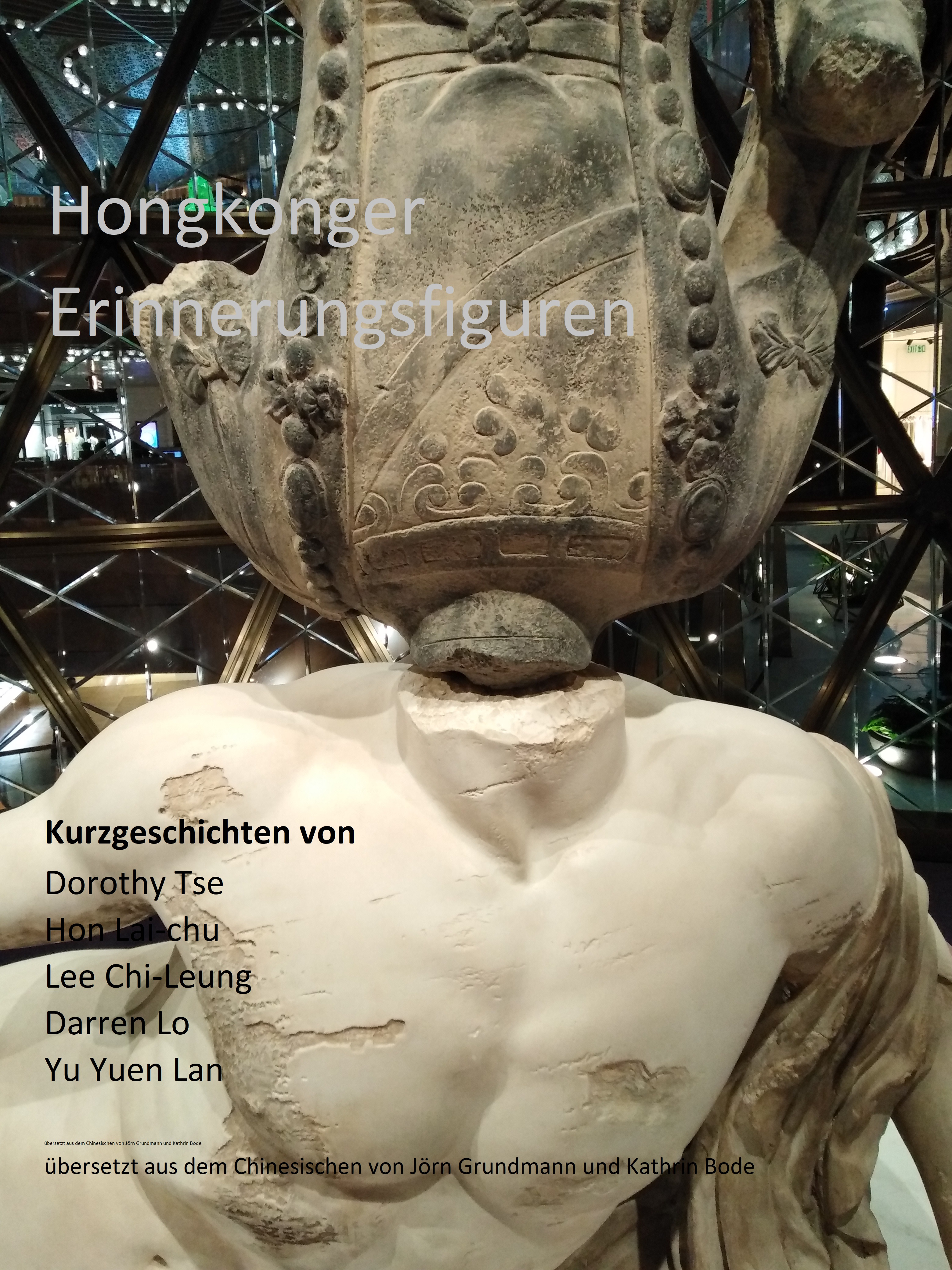 Figures of Memory from Hong Kong

by : Five authors from Hongkong

1.
YU Yuen Lan 余婉蘭, “Cave of Forgotten Dreams” (Höhle der vergessenen Träume) Fleurs des Lettres 字花 85 (2020): 34–41.
Translator: Jörn Grundmann
About the short story:
Stripped of his memory and physicality, a disoriented young adult slowly awakes in a dark room, finding his consciousness and senses connected to a mechanical body that is not his own. While trying to determine his surroundings and to reassure himself of his own personhood, he recalls the total erasure of his past existence having been decided upon by his parents as a last resort to save his life. Constantly on the verge of fainting, he sets out to explore the unfamiliar environment he finds himself in. Fragments of perception reveal a dystopian scene of devastation that hints at the protest-shaken city of Hong Kong in 2019/20. Yet the vaguely familiar fragments remain utterly incoherent. They do not bring back the image of the city we once knew, but coalesce instead into an uncanny vision of a place deprived of its identity, memory and soul. What remains is a ghost town where seemingly intact human shells dwell cave-like behind innumerable window holes in a city of ruins.
About the author:
YU Yuen Lan (余婉蘭) is a journalist and writer from Hong Kong. The Bestiary 無一不野獸 (2018) is her first anthology of short stories and poems. In her writings she inquisitively explores primitive desires, perceptions of infinite void and the prospect of death, woven in the complexity of family dynamics. Her topics often touch upon the hidden areas of the unconscious both in individuals and society.

2.
LEE Chi-Leung 李智良, “Wind und Laut” (Wind and Sound) 風與聲, Q-Square 方圓 3 (Hong Kong: The House of Hong Kong Literature, 2019): 41–48.
Translator: Jörn Grundmann
About the short story:
Torn between the anonymity and uncontrollable dynamics of violent street protests and the oppressive isolation in his or her room, a young individual tries in vain to break this cycle of despair, paranoia and compulsion brought about by getting involved in the protest movement. Contemplations of suicide alternate with attempts to make a clear cut with the protagonist’s past as a protester and to return to some sort of everyday life. Yet one chat message suffices to shatter the illusion of normality and to restart this cycle of dread. ―Written several months into the period of civil unrest that shook Hong Kong in 2019/20, LEE tries to describe the psychological state of a protester in a place that in its very conception and design is hostile to the psychological and even the physical wellbeing of people by institutionalizing human isolation.
About the author:
LEE Chi-Leung (李智良) is a fiction and non-fiction writer. His writings are known to disrupt genre boundaries, and are marked by a hyper-consciousness of the visceral and affective experience of capitalistic urban existence. Titles under his name include Porcelain 白瓷 (1999), A Room Without Myself 房間 (2008, winner of Hong Kong Book Prize and the Hong Kong Biennial Awards for Chinese Literature), The Grass is Bluer by the Sea 海邊草更藍 (2018) and Days We Cross 渡日若渡海 (2020).
LEE received his BA and MPhil degrees in comparative literature from the University of Hong Kong, and had worked as free-lance contributor, editor, thesis ghost writer and translator. In recent years he has been teaching creative writing, film and literature-related courses in local universities and writing workshops for youth and adult in the community.

3.
HON Lai-chu 韓麗珠, “Becoming one’s own” 成為自己的人, in idem, Half Eclipse 半蝕 (Taipei: Acropolis, 2021), 363–424.
Translator: Kathrin Bode
About the short story:
In 2020 the pandemic and political developments changed the course of Hong Kong and the world. Everyday life has been put on hiatus in many places as people and entire societies entered into a state of “Half Eclipse.” They do not experience a total eclipse but neither do they continue to live in broad daylight. What used to be taken for granted is now in the process of being eroded. It is not that we never had a home, but this home is now disappearing bit by bit together with our sense of security. If this characterizes the human condition in the twenty-first century, then how are people supposed to live in this state of gradual disappearance?
Reflecting on her own experiences as a witness to the changes that Hong Kong underwent in the last two years, HON turns inward and resorts to writing diary-like contemplations through which she probes into issues that far exceed the narrow scope of what happened in and to Hong Kong.
About the author:
HON Lai-chu (韓麗珠) is a Hong Kong writer. She has authored eight books and won numerous awards, including the Hong Kong Biennial Award for Chinese Literature for fiction. She was a resident at The University of Iowa's International Writing Program in 2010. HON's 2006 novella The Kite Family 風箏家族, won her the New Writer’s Novella first prize from Taiwan’s Unitas Literary Association. A Dictionary of Two Cities 雙城辭典, which she co-authored with fellow Hong Kong writer Dorothy TSE Hiu-hung (謝曉虹) was published in 2013 and received the 2013 Hong Kong Book Prize. Among her most recent Publication are Returning Home 回家 (2018), Embroidered Skin 人皮刺繡 (2019), and Black Sun 黑日 (2020).

4.
Darren LOU Cheuk-leun 盧卓倫, Nachtsee (Nightsea) 夜海 (Hong Kong, Spicy Fish, 2020). (Selection of 71 pages from a total of 245)
About the short story:
People with disabilities, hired laborers, non-binary people, the homeless and people living in precarious circumstances ― Darren LOU focuses on the everyday life and existence of marginalized groups in Hong Kong. He describes an old woman, who lives alone among countless pieces of new and used cloths, seemingly unable to manage her life. The narrator slowly discovers the meaningful order in her chaotic flat. He starts to understand the world in which she lives and immerses into the experiences she has made – everything is closely connected to the city and the many changes it had experienced.
About the author:
Darren LOU Cheuk-leun (盧卓倫) started to write at a very young age. After finishing high school, he worked for four years in various jobs before entering University. He graduated from Hong Kong Baptist University in 2020, having gained a bachelor’s in social work. Presently, he is working as a social worker in a Christian NGO in Hong Kong. His writings appear in various literary magazines such as Fleurs des Lettres 字花 and P-articles 虛詞. His first collection of short stories, Night-sea 夜海, was published in 2020 by Spicy Fish Publishing House.

5.
Dorothy TSE Hiu-hung 謝曉虹, “City in flux of the bygone” 逝水流城, in idem, Ghost in the Umbrella 無遮鬼 (Hong Kong: The House of Hong Kong Literature, 2020), 1–112. (Selection of 80 pages)
Translator: Jörn Grundmann
About the short story:
In this novella, written in a style that might be best described as magic realism, the protagonist experiences a growing estrangement from his or her family members and from the city that used to be their home. The loosely connected episodes are marked by constantly changing dimensions of space and time as well as by the permeability between the boundaries of dream and reality. Yet no matter how fantastic and unreal TSE’s masterfully crafted images might appear, the uncanny reality they allude to constantly remind the reader of the protests and the massacres that took place in this city and of the deep trauma they have inflicted on the population of Hong Kong.
About the author:
Dorothy TSE Hiu-hung (謝曉虹) is the author of four short-story collections in Chinese, including So Black 好黑 (2003, 2005) and Ghost in the Umbrella 無遮鬼(2020), and has garnered attention in English since the 2014 publication of her collection Snow and Shadow (translated by Nicky Harman; longlisted for 2015 Best Translated Book Award). Her literary prizes also include Taiwan’s Unitas New Fiction Writers’ Award and the Hong Kong Award for Creativity Writing in Chinese.
Dorothy has been granted residencies at Art Omi, The Leeds Centre for New Chinese Writing, the University of Iowa’s International Writing Program and Vermont Studio Center. TSE was a winner of the 2019 Words Without Borders Poems in Translation Prize. A co-founder of Hong Kong’s literary magazine, Fleurs des Lettres 字花, she teaches creative writing at Hong Kong Baptist University.
Her first novel Owlish鷹頭貓與音樂箱女孩has been published in Chinese in 2020. The English version (translated by Natascha Bruce), received a PEN Heim award and will be published in 2023 by Graywolf in the USA and by Fitzcarraldo in the UK. The German version (translated by Marc Hermann) is bound to appear in 2022, published by Büchergilde.

About Us
Sessions
Miscellaneous
Translators Profiles
Powered by Fromlabs